Tory Island / Thoraigh is the most Northwesterly point in Europe, this treeless island measures 3 miles by 1 mile long.
Tory Island has been populated since the age of Neolithic farmers four thousand years ago. Legend, which dates Tory Island back to the Bronze Age, has it that the island was occupied by a race of pirates whose god-chief was Balor of the Evil Eye.
In the 6th century St. Columbcile founded a monastery on Tory and its round tower and Tau Cross still survive. The power of the sea is a constant theme in the Islanders "primitive" paintings, which are famous throughout the world.
It is said that years ago the civil authorities wanted to set up a prison on Tory. An ideal spot for a prison as it is practically impossible to escape from this ancient dungeon fort. Because of its situation on the Northwestern seaboard, it is bleak, remote and until recently inaccessible and for far too long utterly forgotten and neglected.
The great seas rolling in from the Atlantic and the deceptive currents sweeping through Tory Sound has severed communication with the mainland for up to six weeks with the worst stormy conditions imaginable. 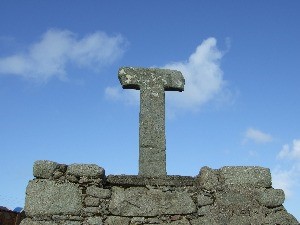