The Corncrake... our perennial summer visitor 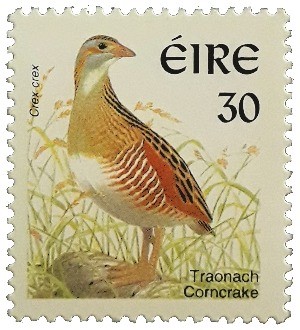 “Your long sub-equatorial journey is over, and you are resting your wings.   I cannot see you, but I can hear you as you call and build your summer home...  as you nestle on the cool soil within the nettle beds and long grasses of my rundale field.

You have travelled as far as you can, you can go no further - you have  reached the rock...  the last craggy outcrop of inhabited northwest Europe.  Tomorrow your job begins."

Celebrated on stamps, posters, lapel pins and even beer mats, our little summer visitor has been chosen as the Tory Island Hotel icon -  a fitting tribute to Tory Island’s rarest of species.

Brown with blue-grey undertones in colour, standing up to 30cm tall, the Corncrake (Crex crex) although territorial, is the coyest of birds. It spends home-time (May to September) in Northern Europe and starts its long journey north from its winter migration in South-West Africa.

Its natural habitat is the native and fast-disappearing tracts of long grasses and nettle beds along Ireland’s West and North-West coasts. Feeding on grubs and small animals, the Corncrake pairs will mate and up to 14 eggs will be laid.

On Tory Island the number of mating pairs has settled in the mid-teens for the past few years. As part of The Corncrake Conservation Project, the island has fenced large tracts of Corncrake friendly fields and planted oats and nettle beds – the Corncrake's favoured habitat. In Ireland, the Corncrake remains on the Red List of Birds of Conservation Concern in Ireland.

For more information, try the links below:

New plan to stop extinction of corncrake in Ireland · TheJournal.ie

How Ireland's elusive corncrake has come back from the brink of extinction (irishtimes.com)